1. Life Is Made Up of Damned Timing

Enoch realized he was holding my ankle and hastily wrenched his hand away. Free from his grasp, I brushed the sand off the area he touched in a composed manner. After his initial shock, his face grew ferocious as he stood.

“Young Lady Margaret, what is the meaning of this?” His voice was filled with animosity. It seemed he was accusing me of abducting him.

I remained seated, despite the fierce stare his golden eyes aimed at me. His glare promised to rip me apart if I refused to provide an answer. Even the tear-shaped freckle under his left eye was sharp enough to prick.

I should have escaped as soon as I woke up.

“Well, I have no idea, either—oh?” I stopped mid-defense and pointed at the sky behind him in surprise. “What is that?”

Enoch followed my finger and turned around to look up. Of course, there was nothing there.

Taking advantage of his distraction, I scrambled up from my position to run; however, Enoch caught me quicker than I could find balance on my feet, caging me in his arms. The force of his interception had us tumbling in the sand once more.

“Where are you running off to?” His vitriolic question left little time to contemplate our scandalous posture. “I demand you tell me how the hell this happened.”

As I still showed no intention of explaining, he grabbed my shoulders and shook me.

“How do you expect me to know any more than you? I’m seconds away from dying with all this confusion,” I finally snapped.

Enoch didn’t bat an eyelash at my blatant resentment. “You attempted to run, what makes you think I would believe you?”

“You threatened me, what should I have done when frightened?”

Enoch bit his lip as if he had been gutted, but his moment of guilt didn’t linger, as his eyebrows furrowed once more. Even in the midst of everything, his charming visage was easy to admire. A flawless, handsome face was candy for the eyes, but that alone wouldn’t save me, would it?

“A glimpse at your face is enough for me to conclude you think this is a joke, Young Lady Margaret.” There was a sense of intimidation in his tone.

Feeling a slight headache blooming at my temple, I massaged the area and said, “You must have poor eyesight.”

“Considering what the Young Lady has done in the past, I believe my suspicions are justified.”

His words helped me recall Margaret’s past deeds. She was infamous for shamelessly pursuing Enoch. It wasn’t uncommon to witness her stalking and pestering him. If another woman approached him, Margaret would grab the poor woman’s hair without any dignity and make a fuss. There was even an incident when she nearly killed him by tricking him into drinking a love potion under the guise of medicine. The case was dismissed by the power of Duke Floné, giving birth to Enoch’s earnest hatred for Margaret.

She had committed many heinous feats and could be punished at any time for her sins, but she was unscathed, thanks to her father’s leverage. The fact Enoch was a prince without support also played a part.

‘I have nothing to deny.’

Instead, I answered in the most placid tone possible. “The Floné duchy is powerful, but it’s not influential enough to recklessly kidnap the crown prince of the empire.

I sighed and ruffled my hair back. Perhaps because of the humid weather, I was overcome with lightheadedness. It was too late to feign composure.

His threatening aura disappeared in an instant.

“Of course…” Enoch eased his anger faster than expected and began to make a proper judgment of the situation. “Was it the work of Rodven’s faction?” he muttered pensively.

It was clear he was referring to the wretched and abandoned prince who had been deprived of the title as heir presumptive to the throne and imprisoned in the north by Enoch. Yes, this may have been a poorly executed political move; however, it wasn’t too late to think about the problem after I escaped.

“Are you finished with your speculations?” Without waiting for a response, I turned around with the intention of venturing straight into the forest, but he caught my arm in a hurry.

Damn. This time, I tried to slip away during the right moment but failed again.

“Where could you possibly go?”

‘It may be easier for me to take refuge in a safe place.’

The female lead, Yuanna, found a cabin toward the end of the first volume of the novel before she escaped through the ‘door’. I had to find the cabin. It would help me survive, as it was also an underground bunker suitable for hiding. Even if I didn’t have the strength to fight, I was more confident when it came to survival skills. It would be no surprise if Enoch didn’t agree with my plans.

“Let me go,” I demanded while wiggling my shackled wrist, but it made no difference.

His eyes lit like glowing embers as he yanked me closer and lowered his head to speak to me in a terribly deep voice. “If I let you go, you will only run away again. I refuse to believe you, Lady Margaret.”

My wrist burned in pain, prompting me to protest. “You’re hurting me.”

He smirked; however, contrary to his reaction, the pressure of his hand loosened whilst still keeping a hold of me. In the novel, Enoch was depicted as a gentleman, but his ‘gentlemanly’ gestures were never directed to Margaret.

There was no point in lamenting the past; I was in possession of Margaret’s body now.

Enoch examined the beach and said, “First and foremost, we need to figure out where we are.”

I concealed my irritation and shook my head to stimulate ideas to find a way out of this situation. How could I escape from Enoch? Even if I ran away now, it was clear that I would be caught again. I had to catch him off guard. Eventually, Enoch would meet the female lead soon; should I run away then?

“Will you go into the forest?”

Enoch glanced toward the area shrouded in eerie darkness. “If need be.”

The island was dangerous after sunset. As an enchanted archipelago, it was bustling with monsters of the night. Anything we planned to accomplish, we had to do before the sun set.

‘Come to think of it, I remember there were also modern items on the island……’

This world was unique, to say the least. It wasn’t an ordinary romance fantasy story about surviving on an uninhabited island, it was set during the historical European period with modern elements mixed in. Therefore, useful items, such as first aid kits and lighters, were hidden here. They were essential equipment for survival.

‘That’s a bit odd. The setting takes place in historic Europe, yet why do modern items exist?’

I wasn’t sure what the author’s intention was. Even in the original work, the main characters tossed them aside out of ignorance. It was important to collect them. If the characters didn’t want them, I would be able to use them for my own benefit.

I was planning meticulously in my head, but perhaps I was being too obvious, as Enoch noticed and cast me a dirty look.

“I suggest you abandon any ideas of leaving my sight.”

His observations were sharp, I would give him that. I sighed as I looked at my wrist he still kept a hold of.

I ended up walking along with Enoch as he led. It seemed I needed to delay the escape plan, but in the meantime, I would have to avoid meeting the other male leads. Speaking of, what were they doing now?

My favorite character was Kayden the Archmage, the fifth male lead that appeared at a later date in the story. He made the last appearance due to his individualistic tendencies. He disliked the notion of depending on a group, thus he opted to wander outside of the female lead’s reach before she escaped. And he wasn’t a ‘wild animal’. I adored his rationality compared to the other vulgar male leads, whom I hoped to never cross paths with.

Lost in my thoughts, I failed to notice Enoch moving quicker and stumbled.

“Must you hold my hand rather than my wrist? It’s uncomfortable,” I protested but quickly turned away when he glared.

It was better to deal with one suitor who despised me the most rather than to deal with multiple suitors at once.

That would be for the better, wouldn’t it? 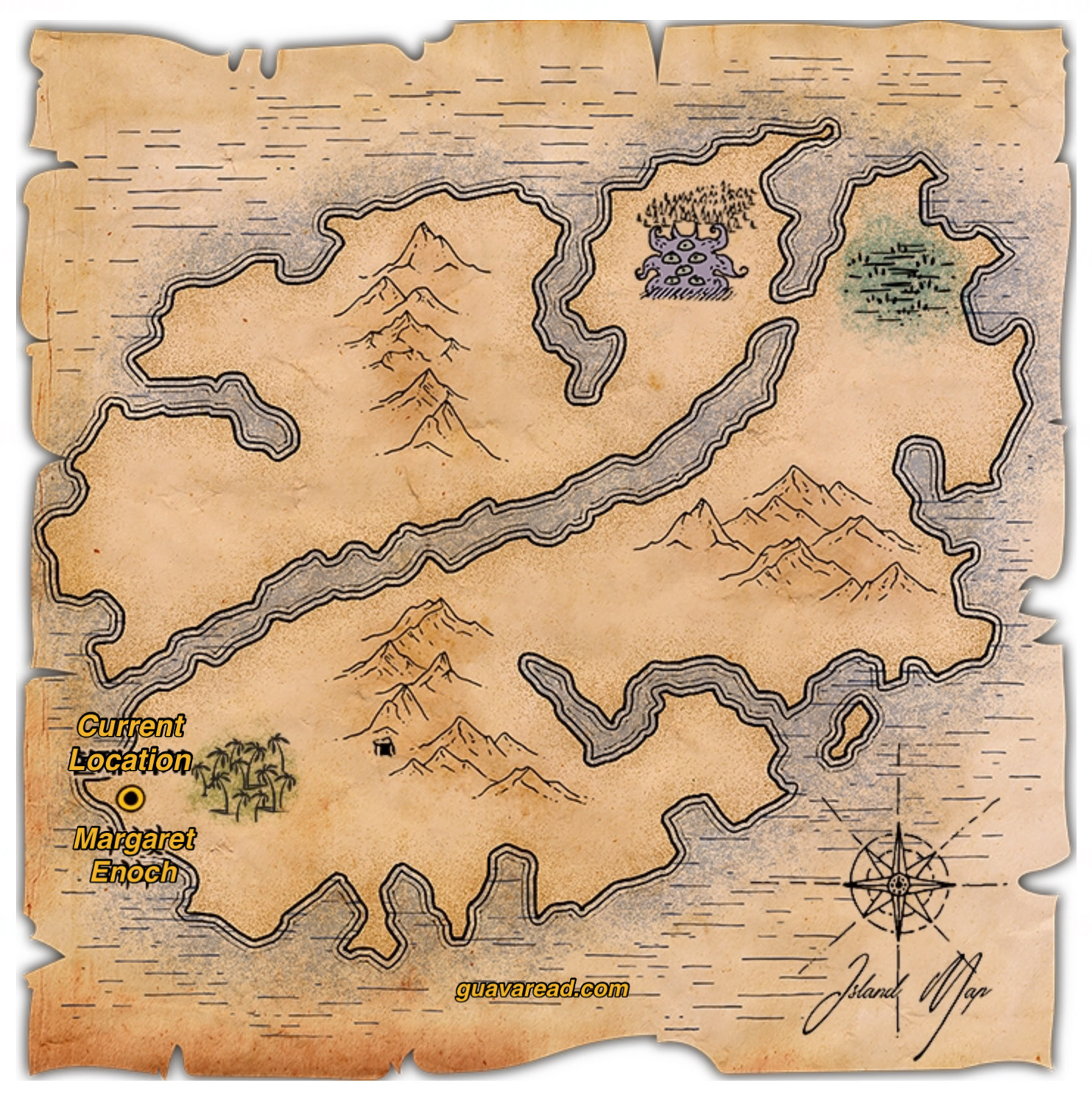 In Order To Meet You, Beloved

Your Majesty, I Want You