I put the bomb in the bag that Kayden had made by intertwining branches. I also did not forget to wrap the shell with the cushioning material contained in the wooden box to prevent the bomb from detonating.

Ruzef, who was watching me quietly, asked,

“Where on earth do you find such a magic tool, Young Lady? It’s amazing how quickly you learn how to operate.”

“I picked up the magic tool by accident. I found out how it works after touching this and that.”

Ruzef looked at me with a face that wanted an explanation, but I didn’t explain further. Silence is better than slipping your tongue.

After packing up, we set off on our journey to our next destination.

Of course, we couldn’t find a suitable settlement right away, so we had to camp for two days.

On the third day, we were walking without a word due to exhaustion.

As I climbed to the top of the mountain alone, I saw the cliff that I had seen in advance as a place where there could be a hut.

“Shall we go this way? There might be a cave near that cliff.”

At my words, the three men exchanged glances once and then nodded.

“If Margaret said so, it would be.”

“I will only believe in Young Lady.”

No, why are you putting everything off to me? It seems like I’ve become the leader of this team.

I finally took the lead.

And we finally found the hut that appeared in the novel ‘Things More Than Survival’ at the bottom of the cliff.

I wondered if it really existed, but I was very fortunate to be able to find the hut without exploring the island for a long time.

But, unfortunately, it wasn’t just the hut we found.

I stopped when I saw three people walking through the bushes on the other side.

A woman with light brown short hair in a clerical robe, a man with short brown hair in a knight uniform, and a man with pink hair in a luxurious uniform all looked surprised when they saw us.

It was clear that they are the female lead Yuanna, the Knight Commander Diego, and the Crown Prince Arthdal.

Crap, life is obviously made up of damn timing. Seriously?

‘Should I run away? Or should I take over the hut first?’

“Oh, there is another woman?”

The first person to speak was Yuanna. When she found me, she made a very friendly face.

Come to think of it, Yuanna in the novel did not hate Margaret. She rather liked her because she was the only woman besides her. It was Margaret who hated and tormented her.

Crown Prince Arthdal ​​stopped Yuanna from approaching me. His face with pink hair is very handsome. Thanks to the gentle look in his eyes, his impression looked docile, he must be popular with women.

But on the other hand, his arrogant eyes that never get intimidated in this wilderness gave off a different atmosphere from Enoch’s.

Yuanna stepped back with a disgruntled face at Arthdal’s restraint. To be precise, it was correct to say that she stepped back because she was too lazy to argue with Arthdal.

Arthdal ​​looked at me and said,

“She’s a woman I know. Don’t go near her because she’s dangerous. She’s a lunatic.”

No matter how crazy Margaret is, I don’t know why everyone here insults me face to face. FXXk.

After hearing Arthdal’s words, Yuanna tilted her head, looked at me, and lowered her head to my feet. I think she’s looking at my handmade wooden slippers.

In embarrassment, I wiggled my toes.

Arthdal ​​warned me with a very aggressive tone,

“I won’t let you go if you come closer, stay there.”

At that moment, suddenly two arms crossed in front of me and covered me.

Enoch on the right and Kayden on the left, each reached out their hands and stood in front of me.

Enoch and Kayden were glaring at Arthdal ​​and Diego.

Come to think of it, Enoch and Kayden finally met the female lead Yuanna, is everything okay?

However, they seemed to be focusing all their nerves on protecting me.

As if to counter Enoch and Kayden, Diego drew his sword and pointed it at us.

Oops, I forgot that Diego is the Knight Commander. He is the only male lead who has woken up armed on this island. That means he has a sword.

That bastard was the one who stole my dress……!

Diego is the Knight Commander of the Langridge Empire, but why is he pointing his sword towards Enoch?

“Weren’t the two of you meeting regularly and exchanging information?”

I leaned over to Enoch and whispered in a low voice that only he could hear. Then Enoch narrowed his brow and let out a sigh.

“It wasn’t like that from the beginning. He didn’t even listen to me.”

Enoch looked at Diego as if he were a teacher looking at the student he cared for.

‘What the heck, there’s no one who’s not crazy here.’

“Why are you there, Archbishop?”

Then, Diego asked Ruzef, who was standing behind me.

Ruzef slowly walked out from behind me with a sullen face.

Arthdal ​​beckoned to Ruzef again. After giving one glance to Yuanna, who was standing next to Arthdal ​​for a moment, Ruzef looked back at me.

He walked towards Arthdal at a very slow pace and looked back at me as if he was asking me to stop him.

Enoch, who was still looking at Diego, said,

“It seems you don’t even want to greet me, Sir Diego.”

Diego and Arthdal’s eyes were on Enoch. I could see Ruzef stopping halfway through and sighing in relief.

Diego bit his lower lip with a sad look on his face. He belatedly knelt down on one knee, put his fist on his chest, and bowed his head.

“I greet you, Your Highness the Crown Prince, the Light of Langridge Empire.”

Banhwang? I looked up at Enoch with a puzzled face. Enoch narrowed his brow with an annoyed look.

The two seemed to know each other well. Come to think of it, it seems that the original setting was that the two had been close since childhood.

“How did you come here, Cheekydal?”

I stared confusedly at Enoch, who responded to the bizarre nickname with a more childish nickname. Could it be that the Enoch I know could speak so childishly?

Enoch glanced at me as I had a questioning look on my face.

“When I was young, I studied abroad at the Hestia Kingdom Academy. At that time, the royal family of Hestia called that guy ‘The Cheeky Arthdal’.”

Only then did I understand and nod.

“So, you’re saying that man is Cheekydal, right?”

Crown Prince Cheekydal? I held back my laughter.

That Cheekydal or Arthdal was about to refute my question but shut his mouth when Yuanna asked,

“It means half prince. He is half crown prince,” Arthdal grinned.

What do you mean by half prince? That’s rude. You Cheekydal……!

If the people of the Langridge Empire heard that, it would surely cause a stir.

“Why? This is neither an empire nor a kingdom, so who would criticize me?”

Arthdal replied with a grin.

However, Enoch ignored him as if his answer was funny.

“Well, when I opened my eyes, I was already here. Banhwang, weren’t you the one who kidnapped us?”

“For what reason did I do that? You’re the one who’s suspicious. Isn’t it the scheme of the Kingdom of Hestia?”

The nerve war between Enoch and Arthdal ​​continued, and Yuanna, who was standing in the distance, was resting on a wooden pole as if nothing was interesting.

I glanced at the hut. In front of the hut was a big, unattended backpack.

The backpack was covered in moss, and the fallen leaves that looked wet and dry stuck together as if they were one body. Seems like it’s been there for a long time.

‘Why the hell is something like that over there? Who brought it?’

I saw a black stick with the tip sticking out of the bag. At first glance, it looked like a sword. It is also a long sword used by knights.

It was a necessary weapon in this dangerous wild.

With a strong determination, I was about to step towards the backpack, but Diego pointed his sword at me.

Enoch and Kayden hugged me at the same time.

“What are you doing now, Sir Diego!”

“You startled me. You punk!”

Diego did not lower his sword even though Enoch intervened. It seemed that the status of the Crown Prince was completely useless in this wilderness.

Arthdal ​​stood next to Diego and pointed to the backpack.

“Sorry, but we found the bag first. Don’t get close or you’ll get hurt.”

“There is no one who sees you as a prince here, so if you threaten Margaret, I won’t let your ass go, you XX don’t act like an XX and get lost!”

Kayden spat out wild and low-level swear words one after another, but Arthdal ​​and Diego didn’t even blink.

“Seeing that people over there are impatient, it seems that there is something important in the bag.”

Yuanna, who was sitting quietly, smiled pretty and said to Arthdal ​​and Diego.

As Arthdal ​​and Diego turned to her without a word, she shrugged and continued, 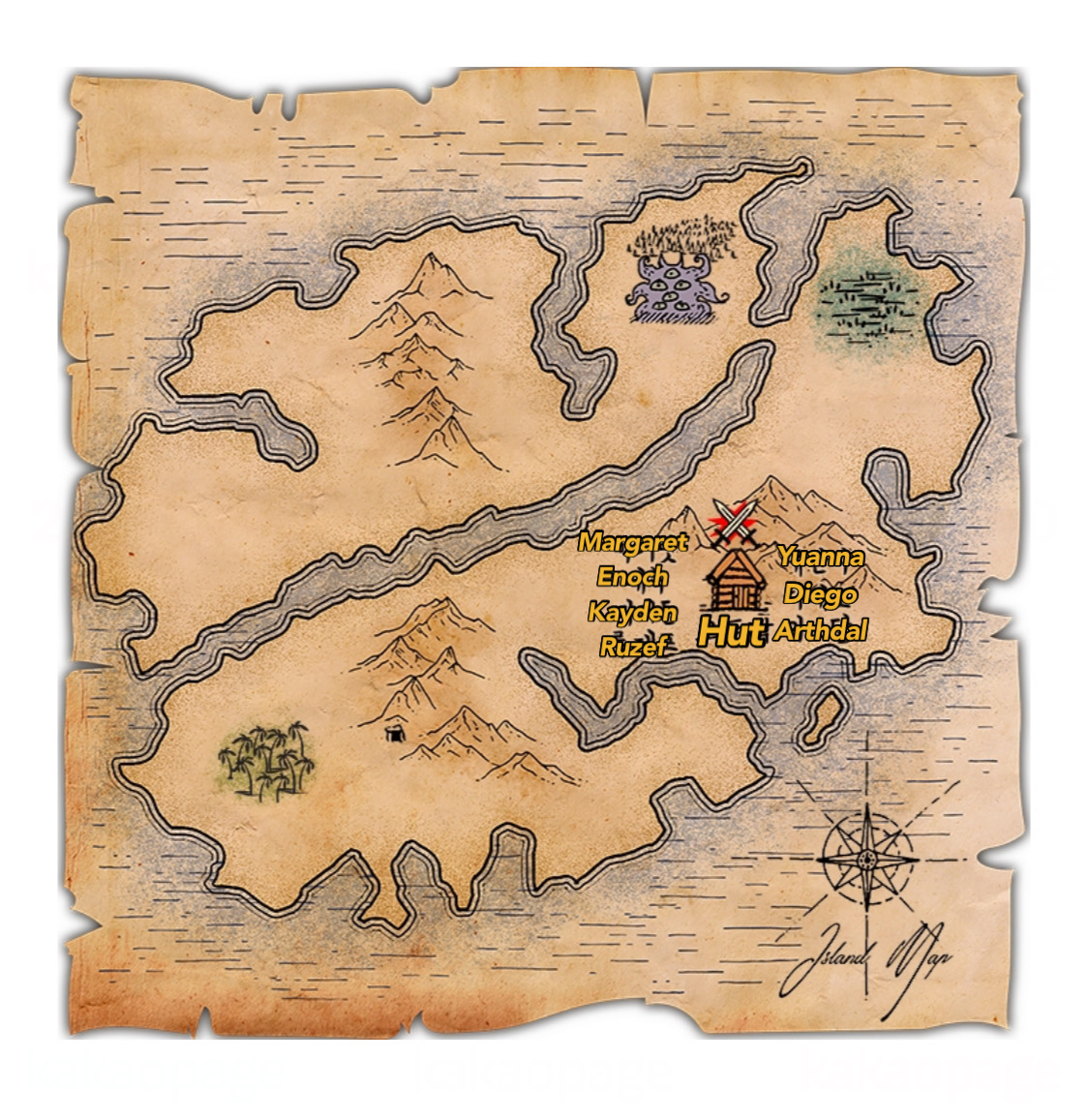 I Will Divorce the Female Lead’s Siscon Brother

The Male Lead Is Obsessed With Proposing to Me

I Took the Tyrant’s Virginity